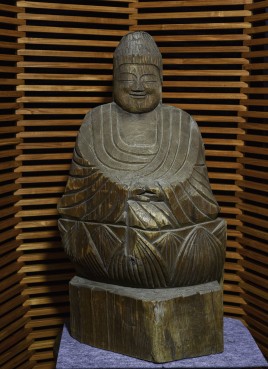 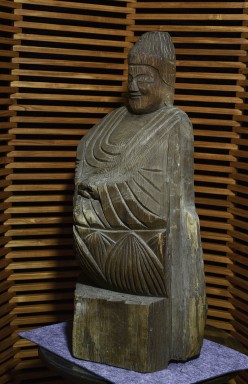 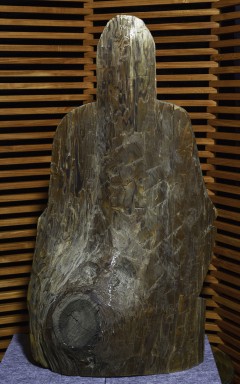 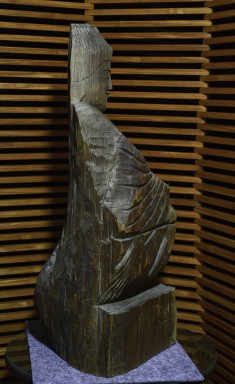 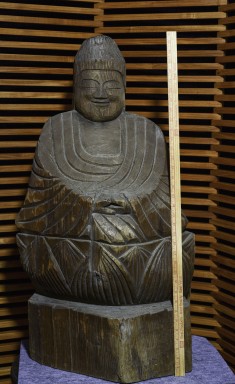 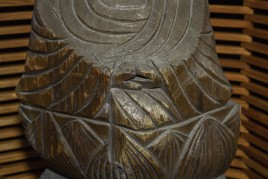 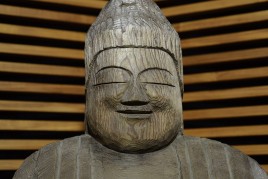 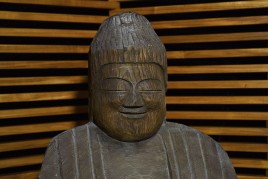 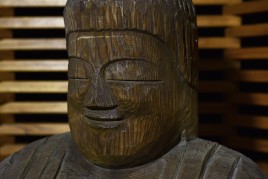 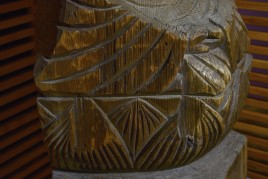 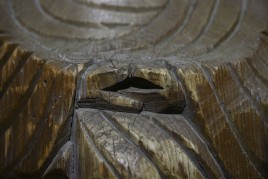 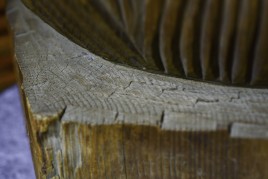 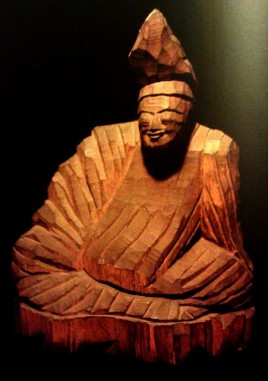 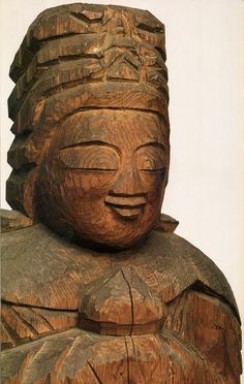 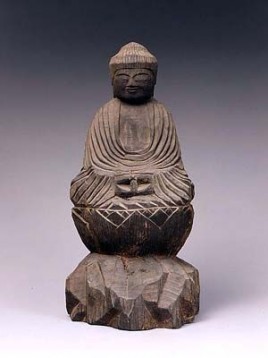 This large imposing Buddha was almost certainly carved by Enkū, who was a Japanese Buddhist monk, poet, and sculptor during the early Edo period (mid/late 1600s). He was born in Mino Province and is famous for carving some 120,000 wooden statues of the Buddha and other Buddhist icons, many of which were given in payment for lodging on his pilgrimages to temples throughout Japan. (thank you Wikipedia).
When I first got this sculpture I could not believe my good fortune that I had actually gotten an original Enku,  and not one made later by one of his disciples. Several things, from the incredible Charisma of the piece, to  the apparent ease and confidence with which it appears to have been made, led me to believe that it must be an original.  I decided to search for every one of his sculptures that I could find on the internet. I managed to find more than 100 reportedly carved by Enku- it is fascinating to note how much they are all unique and how much Enku shows the same techniques over and over. For example, there is a way the mouth Smiles in almost all of his statues that is a signature feature. It radiates Joy in a way that is hard to describe. A number of them have the exact same kind of chip carving on the top of the head as mine. a number also has the same amorphous body with exactly the same diagonal lines placed in the same way to suggest wrinkles in the body.

--This Buddha has now taken center stage in my home.  He is at my front entrance and is the first thing to greet people as they enter the house. There are a few things that really stand out in his sculptures that are hard to counterfeit. this is a particularly large example and is made by joining a few pieces of wood together. When you look at some of the other larger statues that are made by joining wood together, they look like they are made of the same kind of wood that is joined in a similar kind of way (though this is hard to tell for sure from small photos online).

--The only thing that is different about many of the sculptures is that many of them are darker brown, almost blackish. In examining them closely, it appears that they have been darkened over time with a patina due to soot from fires over the centuries. I do not believe that it is any kind of lacquer or a different kind of wood than he typically uses.-I think that they are lighter because of a combination of having been cleaned more and because they had never gotten as darkened, to begin with. You can see traces of very old untouched dark brown almost black patina in many of the deep crevices similar in color to that of many of the dark sculptures carved by Enkū. I've put up photos of a few other of his sculptures at the end of the listing to give you a sense of what some of his other sculptures look like, -- The prices for his sculptures can run high- Even the smallest ones if they are any good tend to sell for many thousands of dollars and the best of his works have brought nearly a quarter of a million dollars.