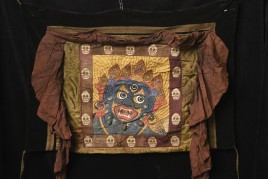 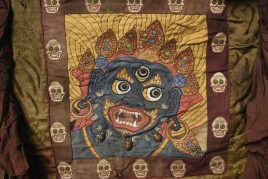 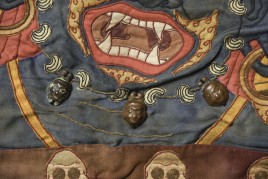 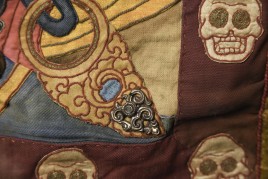 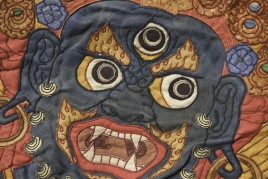 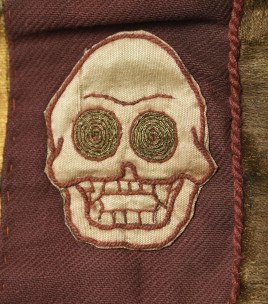 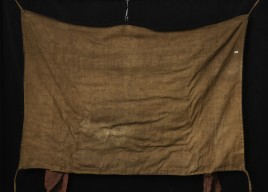 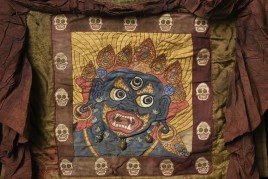 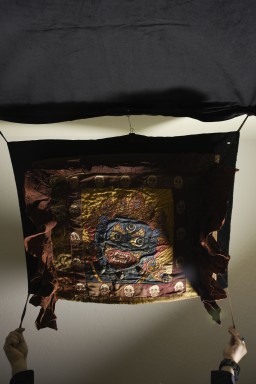 Fine Mongolian applique Thangka/Shrine Awning. Probably 50 to 80 years old, made with a dozen+ different types of much older antique silk taken from earlier Buddhist material. Each color of silk has a different pattern and weave. A striking example of its type. These were readily available in the Asian Art market in the 1990s when Mongolia first opened to the west. Now they are almost all made with new silk, as all of the old silk was gone decades ago. Many dealers would sell this as being from the 19th century.  Very hard to find now. I generally only find them, as I did this one and the one posted right next to it, out of an old collection that was put together 30 years ago.

The subject of this piece is Mahakala, The protective Deity of Mongolia. It is very unusual in that it is a huge image placed in an asymmetrical way. I've never seen this before in 30-plus years. The main image is surrounded by 16 skulls. The skulls have carefully sewn metallic thread eyes. Mahakala also has one metallic thread earring. He also has three small metal heads sewn to the material underneath his head. The execution is very skillful and meticulously done in a way that causes the image to pop out and almost look three-dimensional. It is extremely animated.
This is no ordinary Applique Thangka- If you notice the Ruffles around the edge of the main image, plus the ties that are attached, they indicate that this is actually the awning for a shrine. It was actually made With the cloth tied to the top front of an altar above the heads of the viewers,  with the image facing downwards, so the Ruffles can hang down around three sides of the viewer While they sit in front of the altar. I've seen a number of these alter awnings or umbrellas over the years, but none had intense imagery on them as this one does. The entire thing shows ritual wear and years of use, though it is in outstanding condition with no signs of damage or repair
(22"H x 31.5"W)